“A fun summary of how we entered the business, narrated by our mascot, Digi the Frog.”

Where did I come from you ask? Well I can’t remember quite that far back, but when I was a tadpole, my father Bull, said I spent a lot of time outdoors.  My French mother Madame, gave me a paint brush to keep me out of the water (fish aren’t our friends).  On the bank one sunny day, these two guys drifted by while fishing.  The tall one (I could see him coming a mile away) walked right by me, but the other one nabbed me for bait.  Fortunately I convinced the tall one that I could be of use for some arty stuff and they’ve been driving me like a slave ever since.  Let me introduce them to you. 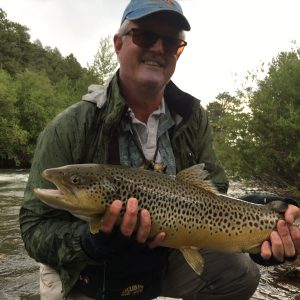 Chris Cowlbeck (the tall one) didn’t really start out as an advertising guy, rather he runs a family boutique real estate company.  There is where the marketing skills were developed as they don’t have the national marketing input from any franchise.  He also learned a lot about business in general from dealing with all the people that buy and sell those big ole houses and ranches. (Why didn’t I get found by one of those ranchers with the big ole lily pad ponds?)  He’s a funny guy but I gotta watch out so he doesn’t step on me with those big feet….keeps me working hard, he has two girls and a wife to feed so he drives me hard as the dickens.  The other guy is much easier to get along with but I’m glad he can catch those big ole dawgs that are always trying to eat me.…

Charlie Clowe (the numbers guy) didn’t start as an advertising dude either, but knows a lot about marketing from all those stores of his that sell pop, crackers and beef jerky (yum).  He’s also a funny guy and a better fisher and hunter than the tall guy (he actually was able to catch me, duh).  Charlie had billboards along I-35 for over 30 years and Chris had his own billboard next to their office for over 25 years.  He and Chris started off as business partners one day a long time ago (when I was just a gleam in ole Bull’s eyes) when they were trying to figure out how to fund a tourism effort to promote their city.  Capital was an issue, so they decided to start it off for their kids one day.  Charlie also has mouths to feed with a wife, son and a daughter, so he works hard too.  They added another sign, then another, bought some and then they put in some really cool flashy ones (I really like them).  Things got super busy for me and they added another fellow with a hairy face and a love for deer and turkeys.  I don’t have enough time for more tadpoles, so off to work I go designing those flashy things…..So from my pad, that’s how I see it.